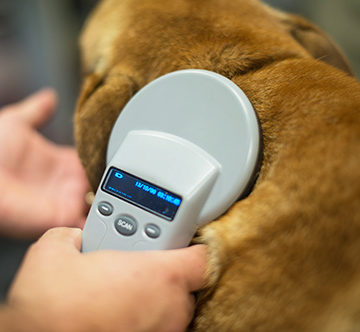 Statistics say one in three pets will become lost during its lifetime. According to the American Humane Association 2009, only about 17 percent of lost dogs and 2 percent of lost cats WILL EVER find their way back home. That is staggering considering there are millions of pets in the United States alone! So, how do we keep them safe?  With a Microchip and registration!

Micro chipping is the only form of permanent identification that cannot fall off or become illegible to read (tatoos). When used as part of standard veterinary care, it gives pets the best chance of being reunited with their owners when lost. My dog Nikki was returned after 7 months!

Having lost a pet myself I can’t imagine going through a day without talking to someone about the benefits of micro chipping their pet with the Datamars or any other permanent identification chip.  I lived the tragedy with my own dog so I know how it feels.  It hurts!  I once thought it would never happen to me because my dog was old and never wandered off.  I had a fenced-in back yard and when we would go outside for a walk I always put her collar and flexi-leash on.  I believed she would never leave my side!  Well… she left.  Not on her own but none-the-less she was gone out of a fenced in back yard, out of my life, with no tags, no collar, no cell phone!  No longer my shadow, my friend, my constant companion.

So my story goes.  I felt sick, alone and lost without her.  I called everywhere, posted hundreds of flyers in desperate search of her.  Nothing!  I visited the area Humane Society and called all the rescue groups.  They were so kind and supportive in my efforts!  No one who knew her could believe that she disappeared off the face of the earth!  At my most desperate point I even searched the ditches along our favorite trail hoping to end my misery and solve the question:  “What happened to my friend?”

I never gave up hope that I would someday see her again!  One day my prayers were answered!  After an agonizing 7 months there she was.  Alive, healthy (Fat!) and wiggling that stumpy little tail of hers as fast as she could.  It took me several breaths to steady myself, to take it all in.  She was BACK!

The reality was a good-Samaritan-type person “found” her sitting in my front yard near the street. Thinking she was alone and therefore abandoned they decided to take her and give her a “good home”. I have no ill-will towards this family. They loved her enough to open their home to her. I just wish they understood the importance of calling their local vet or animal control FIRST before thinking someone just left her behind! And, the final kicker of this story was the fact that they wanted to KEEP her after hearing I was identified as her true owner. They asked how I could prove she was really mine. When found she didn’t have a tag or a collar on. I sympathized with this family.  They had fallen under Nikki’s brown-eyed spell! Ah, but I did have a way!  Despite of the fact that after 7 months apart I could still describe every “old lady lump”, every scar, every missing tooth I had a sure-fire way… she was micro chipped! Years earlier I was told about this tiny device called a microchip. Didn’t know much back then about the importance of that little chip but instead took the recommendation of my veterinarian and had it implanted. (Thanks Doc!)

Nikki and I enjoyed several more years together. And, to pay-back the kindness shown by the folks at the Minnesota Valley Humane Society I decided to collect money for their annual Woofer and Hoofer. Each year I volunteered my time, talking to anyone who would listen to the benefits of micro chipping and implanting the chip right there during the fund raiser! The picture noted above in my story is the last we had together, taken at the 2003 Woofer & Hoofer.  We placed 2nd in fundraising that year ~just missed it! The following year, in memory of her, “WE” placed first!

Micro chipping has been proven safe, effective and permanent!

Microchip your pets, dogs as well as cats.  Don’t become a statistic!

The microchip is a tiny transponder the size of an uncooked long grain rice. This is a permanent radio-frequency identification (RFID) chip implanted under the dog’s skin and read by a chip scanner or wand. Implantation is done with a sterile injector (looks like a needle) that places the chip under the loose skin over the dog’s shoulder.

The advantages are obvious — the process is quick and no more painful than a routine vaccination, the chip can’t get lost, become illegible as with tatoos, can’t “fall off” as with collars, the ID number of the chip is unique and one of a kind, the dog doesn’t have to be wrestled to the ground and shaved to see if it’s there like with tattoos, and the owners name and address are available on regional and national data bases so a dog can be returned quickly and safely from just about anywhere.

Dogs can be scanned when picked up by an animal control officer or brought to the shelter. If a chip is present, the scanner will read the number and the shelter staff member can call the appropriate registry for the identity of the owner.

As a double protection for dogs chipped, veterinarians who install the chips have scanners. Thus a found pet can be taken to a veterinary clinic for scanning and may never make the trip to “the pound” saving the owner money!

As stated before microchips have been particularly useful in the return of lost pets. They can also assist where the ownership of an animal is in dispute. Similar to my case where the “new” owner wanted proof of my claim to Nikki.

Animal shelters and animal control centers benefit using microchip identification products by more quickly and efficiently returning pets to their owners. When a pet can be quickly matched to its owner, the shelter avoids the expense of housing, feeding, providing medical care, and out placing or eventually euthanizing the pet. Micro chipping is becoming standard at shelters: many require all adoptable animals to receive a microchip, and provide the service as part of the adoption package. Animal control officers are trained and equipped to scan animals.  To have a pet scanned is FREE!

In addition to shelters and veterinarians, microchips are used by kennels, breeders, trainers, registries, rescue groups, humane societies, clinics, stables, animal clubs and associations, researchers and pet stores. Several countries now require a microchip when importing an animal to prove that the animal and the medical/vaccination record match.

Important information for CAT owners!!!  Many cities and counties don’t even bother to pick up stray cats as they are not part of their ordinances.  Luckily for those who are taken in by good-Samaritans… many contact their veterinarian and inquire about the scanner.  We have successfully returned a number of felines to their anxious families because they were micro chipped!  It only takes one time for the door to be left open for a curious cat to go out too far and get spooked into going further away from safety.

DO NOT USE OUR ADDRESS IN YOUR GPS for directions. It may bring you into downtown Prior Lake which is much farther south than we are actually located. Please enter Perkins Restaurant in Savage as we are located at the end of the frontage road shared with Perkins Restaurant.

IF THIS IS CONCERNING AN ANIMAL THAT NEEDS OUR ATTENTION IMMEDIATELY, PLEASE CALL US AT 952-447-4171!